Is “sensorimotor” a real word? Yes, actually, it is. It’s a compound word; the two root words are “sensory” and “motor.” It is an adjective, and it just means “having to do with both sensory and motor functions,” which is easy enough to remember. One caveat, though: it is only a word in the context of neuroscience. The rest of the time it doesn’t count, and you can’t use it in Scrabble (unless you’re playing with neuroscientists). Everyone else in the world gets along just fine without it, and that’s why you may never have heard it before, and why most people don’t think it is a real word when first they hear it.

You may, at this point, wonder why neuroscientists need to have their very own special word. Well, sometimes in science, someone discovers something completely new, and then they have to make up a word for it, because nothing existed before. But, this isn’t that kind of word. “Sensorimotor” is just two already existing words smashed together to mean exactly the same thing as they meant separately. A skeptic might say that it’s just intended to be confusing; just one way scientists can make what they do sound more impressively complicated than it really is. This sometimes happens too (in science just like in every other field), but that isn’t what happened here. The truth is, that from a neuroscience perspective, “sensory” and “motor” just go together naturally, and you end up saying “sensory and motor” a lot. Human nature being what it is, and scientists being humans, after a while you get lazy and just slur it all together. Voila! A new word is born.

So far, this has all been very anticlimactic. All I have done is define a long word that means exactly what it sounds like and only exists because of laziness. But, perhaps you see that there is a more interesting question here that deserves a little more investigation. Namely: why do neuroscientists end up saying “sensory” and “motor” together so frequently? Why do “sensory” and “motor” go together so naturally that they end up becoming one (rather long) word? That is a good question, but in order to answer it, we will need to start with a different question, and that is: why do we have brains? Now this is starting to get deep and a little bit complicated, so let’s back up and ask a more basic question. Who has a brain? This might seem like an easy question, but the answer might surprise you. First of all, brains are made of networks of neurons, so single-celled organisms don’t have brains – that rules out algae, bacteria, viruses and protozoa. Plants don’t have neurons, and thus they don’t have brains either – not even the carnivorous ones. That really just leaves animals, and as it turns out, almost all animals have brains. That includes the usual suspects, like people, whales, monkeys, dogs and cats, but it also includes birds, fish, lizards, squids, slugs, spiders and insects.

That’s right, insects have brains. Fruit flies are carrying teeny tiny brains around in their teeny tiny heads. In fact, there are only a few kinds of animals that don’t have brains, Porifera (sea sponges), Cnidaria (jellyfish), Echinoderms (sea stars and sand dollars), Bivalvia (clams and oysters), and adult Tunicates (sea squirts). Sponges don’t have any neurons, but jellyfish, sea stars, and clams have rudimentary nervous systems (just no central nervous system). Sea squirts are perhaps the most interesting in the group – they have a brain in their larval stage, but they consume it for food when they reach maturity. Why do they do that? It seems counterproductive (and gross). Gross it may be, but for a sea squirt it actually makes sense. You see, metabolically speaking, brains are very expensive. In other words, it takes a lot of calories to keep them going. In general, calories are difficult to come by, so it doesn’t really pay to have a brain unless your brain does something really important for you. For the larval sea squirt having a brain is darn handy. But, when that sea squirt matures, the brain just becomes an expensive accessory. However, a brain is a terrible thing to waste – so the squirt just eats it. Problem solved. So, what happens in the life of sea squirt that renders its brain useless? Well, in the larval stage sea squirts swim around, looking for a good rock to settle down on. When they find a good rock, they anchor to it, and never move again. This is when they undergo maturation, and digest their nervous system. They don’t need a brain because they will never move again. This is also why sponges don’t have a nervous system - sponges don’t move. You need a nervous system to move; the more complicated the movements the more complicated the nervous system. Fundamentally, this is why animals have brains, so they can move. 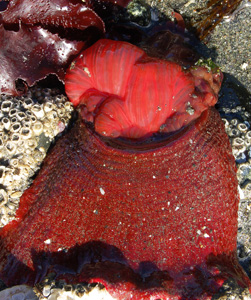 There are a few reasons why the ability to move gives an animal an advantage. First of all, there might not be very much food where you currently are, and it would be helpful if you could go someplace where there is more food. Also, you might look like food to your neighbor, and you might want to get away from those hungry eyes. There are lots of other reasons as well, and I’m sure you can think of more examples. But, here is a critical point: being able to move doesn’t mean you know where to go. If you just move around randomly you might end up in an even worse situation than you started in. It would be useful if you could, say, see, or hear or feel or touch the world around you. In other words, it really helps to have some sensory information. And this is why sensory and motor go so closely together; they are the two most basic things that brains do. Your sensory system tells you where the food is and your motor system takes you there. Or, if you prefer, your sensory system tells you where the predators are, and your motor system takes you away (quickly).

Of course big, complicated brains (like the human brain) do lots of other things, like decide which food is the best food, and which predator is the scariest predator, and what you should do if the predator is between you and the food. But, fundamentally, sensorimotor is still what your brain is all about. Even in our very complicated modern lives, what our brains really do for us is tell us what is happening in the world, and what we should do about it. It is so important that neuroscientists made up a new word to describe it; it is so important that we have made it the focus of the Center for Sensorimotor Neural Engineering.

Speaking of which, the only word our Center name we have left to define is “Engineering,” and that is what I will do next.