I am old enough to remember when all telephones had wires. You didn’t carry them around in your pocket because they were too big and they had a cable coming out the back that plugged into the wall. If you disconnected the cable from the phone or the wall, the phone didn’t work. You could also cut the wire to disable the phone, and this frequently happened in horror films. I tell you all of this not so that you can understand horror films better, but because it makes a great analogy for a spinal cord injury. The phone is plugged into a wall jack which connects it to an enormous network of cables connecting 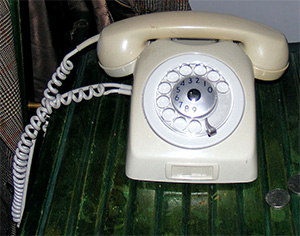 that phone to every other phone in the world. This is great, because you can use it to get pizza. You pick up the phone, you call the pizza place and you say “bring me a pizza.” Next thing you know, the pizza is at your door. If there is a big storm and a telephone pole gets knocked down and the phone line is broken, then, when you pick up the phone you no longer hear a dial tone. Instead, you hear nothing. No one knows you want a pizza, so you don’t get one. You have a perfectly good phone, the pizza place has a perfectly good phone, and almost all of the wiring in the world is still in place and working just fine. None of that matters to you though, because one telephone pole is down.

How is this like a spinal cord injury? Remember that it is your brain’s job to decide which things to do, and it is your muscles’ job to do them. Once your brain makes a decision it needs to communicate that decision to the muscles so they can get on with it. Your spinal cord is like a telephone line connecting the two – you break the line and you hear nothing. It doesn’t matter that the brain is intact and the muscles are intact and the whole rest of the nervous system is just fine. The muscles don’t know the brain is calling, so they don’t respond.

At this point, let me backtrack a little bit and make it clear that this is a dramatically oversimplified picture of what really happens in a spinal cord injury. For one thing, there are many different kinds of spinal cord injuries, and not all of them result in a complete loss of communication, and most of them involve damage to more than just the spinal cord itself. Perhaps more importantly, unlike a telecommunications network, the nervous system is alive and when it sustains an injury it tries to heal itself. So, the real effects of an injury are diverse and complicated. But, recognizing the limitations of the analogy, let’s forge ahead and consider some of the implications. We have a system which would be fully functional except for a failure at one point. This is deeply frustrating, but for neural engineers it is also inspiring because if we can find a way to bridge that point, the system can work again. If we can figure out how to do that, then people who have suffered a spinal cord injury can regain command of their own body.

What does it mean to “bridge” a spinal cord injury? It means recording the signals that the brain is trying to send via the spinal cord, translating them into an electrical stimulus pattern that the nervous system understands, and then providing that pattern of electrical stimulation at some point below the level of the injury. That sounds straightforward until you consider all of the things that go into making that happen. It is easy to say you will translate brain signals into electrical stimulation – but to translate something you need to know what it means in the first place, and that’s a hard problem. When neurons communicate with each other they don’t use words. Likewise, it is easy to say that you’ll stimulate somewhere below the injury, but it isn’t easy to get natural movements from artificial stimulation. And while those hurdles may seem obvious, here is one you may not have considered; where is the power for all of this electrical stimulation going to come from? If you want to deliver stimulation regularly (and you do), you’re going to drain a battery quickly. It’s hardly practical to be plugged into a wall outlet all the time – so what are you going to do?

As I hope you can see, this bridge-building is a big project. It’s too big for one person, even one very smart person, because it requires a lot of different kinds of expertise. This is where an organization like the Center for Sensorimotor Neural Engineering (CSNE) is important, because it brings together people with different skill sets, all interested in working to solve different parts of the same problem. This particular project is being taken on by three CSNE researchers, each with a different background, each contributing an important piece to the puzzle. This project and these researchers will be the focus of my next few articles where I hope to show you how the bridge is taking shape.