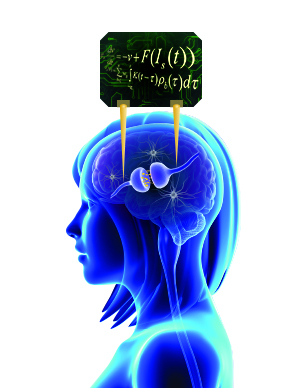 The goal of this testbed is to engineer neuroplasticity in the brain, improving the brain’s ability to adapt and recover after injury. It is targeted toward people with neurological disorders such as stroke. This is where we will test the ability of our neural stimulation protocols to induce activity-dependent neuroplasticity by remodeling neural connections between cortical regions in the brain.
Related reading: “Using mathematics to help heal the brain”

This testbed focuses on understanding and developing mathematical algorithms designed to help a brain-computer interface co-adapt with the brain itself in a neural stimulation system. An example of work in this testbed is to quantify large-scale cortical dynamics during learning and neuroplasticity induction, as well as changes in cortical dynamics that occur when users directly control brain stimulation using their thoughts.
Related reading: “Brain signals deliver first targeted treatment for world’s most common movement disorder”