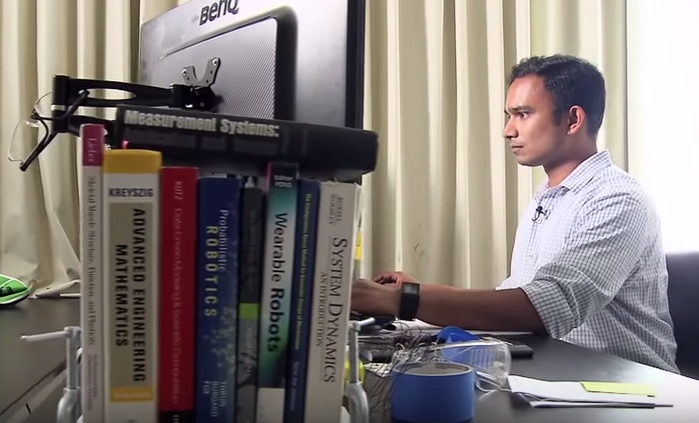 While applying to graduate schools and, specifically, to the University of Washington, Gaurav Mukherjee came across the website for the Center for Sensorimotor Neural Engineering. During his visit to Seattle, he spoke with CSNE Executive Director Eric Chudler, who connected him with a few graduate students.

He liked what he saw at the UW and, more specifically, at the Center. “The University of Washington was of interest to me because of the collaborative atmosphere that’s formed across disciplines,” he said. “CSNE was the first group that I found at the UW that brought this more into clear perspective.”

When he returned to MIT—where he was a visiting student—he saw the call-out for naming the CSNE’s new blog. He said he thought it might be interesting to submit an idea. Turns out he won the naming contest. The “Engage & Enable” name he came up with was the most creative idea, and included a visual.

Mukherjee had suggested the name using neurons for the “en.” He also said “engage” was for the student and research community, and “enable” was for people who have disabilities. Pretty clever.

He was subsequently accepted into graduate school and is a PhD student in the Department of Mechanical Engineering. Mukherjee works in the Steele lab, which focuses on human ability and engineering, and things like 3D printing orthotic devices to better fit people who need them.

Mukherjee’s research focuses on using engineering to improve the quality of life for people with limitations in hand function due to cerebral palsy, stroke and other neuromuscular conditions.

From a very young age, he said he knew that he wanted to pursue engineering. As an undergraduate at the University of Pune in India, he started working in the automotive sector. But as he started to look around at what else was out there in mechanical engineering, he was drawn to things like exoskeletons. This search is what led him to pursuing graduate work in the United States.

“I was lucky enough to find a project with the Indian army where we focused on developing a partial finger prosthetic platform but beyond that, it was getting a little challenging to expand the scope of that project,” Mukherjee said. “The United States offered programs where I could actually perform research into exoskeletons, bringing machines to the aid of what Dr. Kat Steele refers to as the ‘ultimate machine,’ the human body.”

Mukherjee is thriving in Steele’s lab and at the UW; he served as a mentor for undergraduate students in the CSNE’s Research Experience for Undergraduates program this summer and he also landed a fellowship through the UW Institute of Neuroengineering, which partners with the Center.

And he has nothing but praise for his current mentor. “Dr. Steele is an engineer by training but she has extensive experience working with people who’ve had cerebral palsy or stroke. She’s a very unique person because she is an engineer who has a very clear clinical perspective on what is needed at the end user’s standpoint. That is probably one of the most important points that drew me to her lab.”

Mukherjee has a master’s in mechanical engineering from the University of Cincinnati. He is featured in a new Explore UW Engineering video.