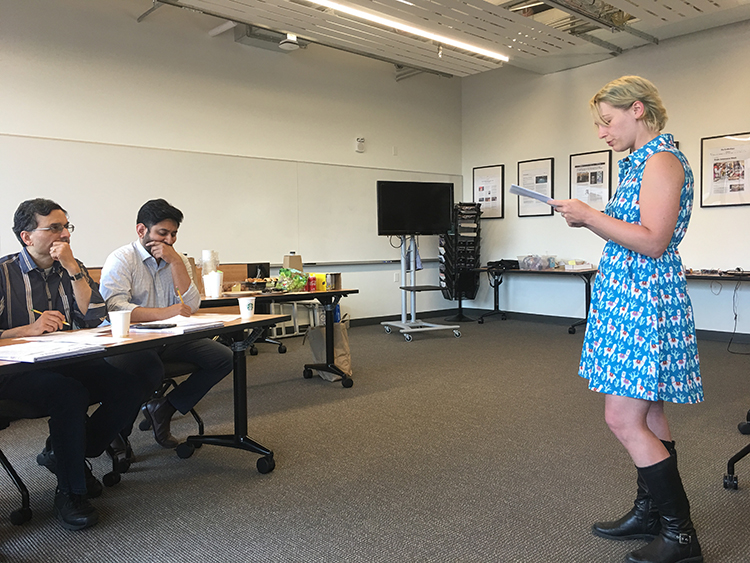 On May 29, 2019, graduate students were challenged in a competition at the CNT to explain their research in 90 seconds using only the thousand most common words in the English language.

Researchers are often asked to formulate questions, design experiments, and solve problems while considering limitations in data, funding, or other resources. For the graduate student researchers who participated in the Ten Hundred Words of Science Competition held on May 29 at the Center for Neurotechnology (CNT), their only constraint was the type of words they could use to explain their research.

Ishan Dasgupta, a post-doctoral researcher at the CNT and University of Washington’s (UW) Department of Philosophy and judge for this event. saw this competition as an opportunity for researchers to tell a story about their work and its impact. He said that scientists are responsible for communicating the goal of their research and its impact, especially when talking to the general public and researchers in other fields.

“A lot of science is a story. If you can convey it, it has great potential in making a difference,” Dasgupta said. “In our center, we often use examples of success stories from people who have been touched by these technologies.”

During the competition, each graduate student had 90 seconds to describe their research in an oral presentation using only the thousand most common words in the English language. For example, they could describe their research as taking place in “computer buildings” (data centers) or the impact of their work on the “bags of stuff inside a person” (human organs). Afterwards, each participant had 60 seconds to provide a more technical explanation of their research so the audience and judges could compare both explanations.

“You want to be able to explain your research whether you’re with your grandmother at a dinner, or if you’re on a plane next to a governor and want to advocate for your research,” said Claire Rusch, a fourth-year PhD student in the UW Department of Biology and outreach officer for the CNT’s Student Leadership Council. “It’s helpful for researchers to have a speech that they can give to everyone and convey the importance of their work.”

Hosting the competition this year was an outreach goal for Rusch. She saw it as a way to augment K-12 education outreach at the CNT, which focuses on educating students about neuroscience, neural engineering, and developments in brain-computer interfaces. These outreach efforts occur through events and programs such as the Brain Awareness Week for K-12 students, the Young Scholars Program- REACH for high school students in the Greater Seattle Area, and partnerships between the CNT and the UW DO-IT program.

More broadly, outreach events like the Ten Hundred Words Competition can help the public learn about a broad spectrum of research that is done today.

“Science impacts people, whether it’s health, environment or climate change,” Rusch said. “Most of the things we do are paid with taxpayer money, and [taxpayers] deserve to hear how we are using their money.”

Melanie Anderson, a graduate student in the UW Department of Mechanical Engineering presented her research about the Smellicopter, an autonomous palm-sized nanodrone. It tracks odors with antennae that are removed from a moth and attached to an electrical circuit. Long-term, these antennae could be modified to smell a variety of different substances, such as chemicals and odors from explosives.

“Right now, my tiny smelling flying computer will only respond to smells that the

[the moth] is interested in,” Anderson said when giving the simplified explanation of her research. “It is possible to change what the animal can smell so my tiny smelling flying computer can smell smoke from fires and sense other things in the air which might hurt people.”

Another participant was Nassima Bouzid, a graduate student in the UW Department of Biology. Rusch read Bouzid’s simplified, written explanation first, which summarized Bouzid’s research on the physical appearance of animals living in “cold high places and warm low places.” In the technical explanation of her research, Bouzid said that her work focused on the physical appearance of Western fence lizards and how it varies based on the lizard’s level of activity and the climate in which they live.

Yoni Browning, a graduate student in the UW Department of Biology, explained the way that the brain forms new memories, which is the focus of his research in the UW Buffalo Lab.

“In order to form a new memory, the brain must keep track of what is happening to [the monkey],” Rusch said when reading Browning’s simplified explanation, which described his research about how monkeys visualize space and memory. “After all, if the brain doesn't know about what is going on now, how can it be remembered later?”

Lastly, Aji John, a graduate student in the UW Buckley Lab, described that “hot days are not that hot when you’re under old trees.” John went on to explain that trees in old-growth forests have lived between 500 and 2,000 years without being logged, and their canopies can regulate temperatures and protect native species of wildlife and plants in the area.

“These trees have the capacity to buffer macro-climatic conditions,” John said in his technical explanation. “I study the microclimates in these old-growth forests and how they relate to macroclimatic conditions.”

The judging panel included Dasgupta; Andreas Schönau, a post-doctoral research associate at the CNT; and Mak Agashe, the CEO of Pifocal who represented an industry perspective. The three judges evaluated each simplified and technical presentation based on how well it communicated the concept, context and potential impact of the presenter’s research in society.

After the judges deliberated, Anderson was awarded a copy of the book, Thing Explainer: Complicated Stuff in Simple Words by Randall Munroe, for best technical explanation, and Browning won a copy for best simplified explanation of his own research. Anderson also won a UW Bookstore gift card for best overall presentation.

Rusch hopes that this event encouraged conversation among scientists in disciplines ranging from mechanical engineering to neuroscience. Dasgupta also saw the Ten Hundred Words Competition as an opportunity for the public to learn more about new research and provide feedback.

“It’s not just that we have an obligation [to make our work understandable], but understanding what the public has to say [about our research] improves science as a whole,” Dasgupta said.

Are you a research scientist? Try writing about your own research with the ten hundred most common words in the English language using the Up-Goer Five Text Editor.

Some submissions from the Ten Hundreds Words Competition are available below. 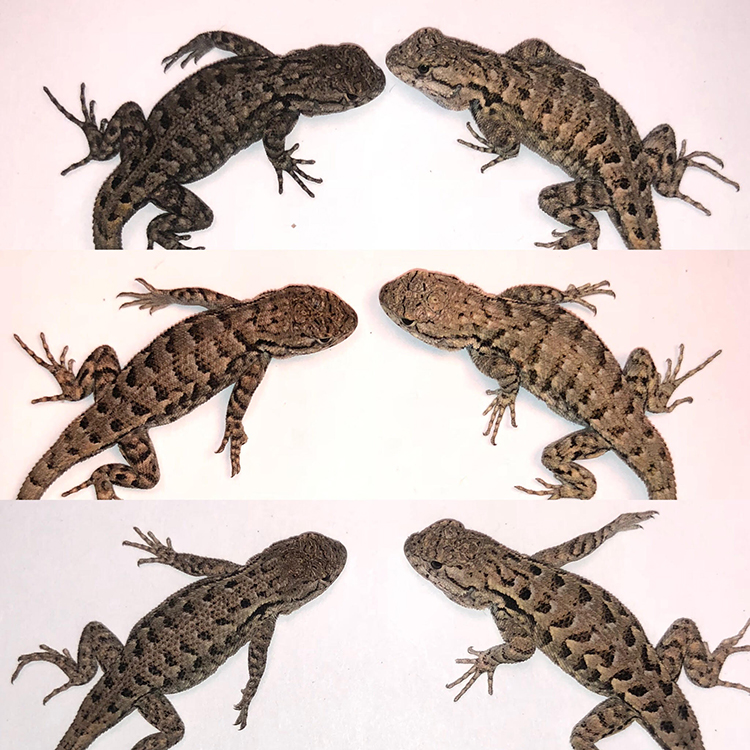 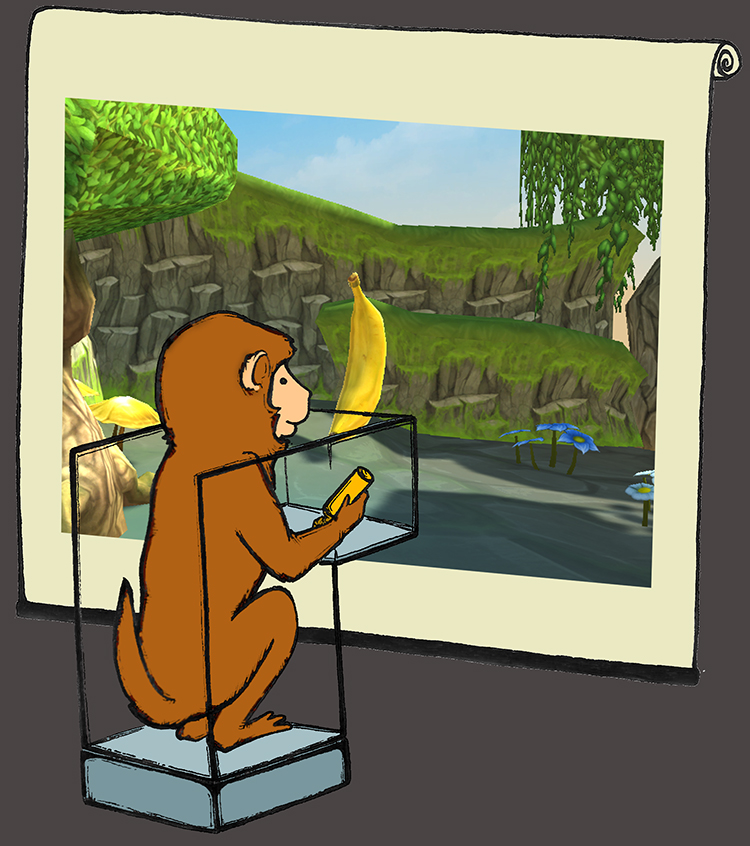 We know that there are parts of the brain that people need to make new memories, but we don’t know very much about how these brain areas work. Part of the problem is that we do not know how single brain cells act in these memory-making parts of the brain. In order to form a new memory, the brain must keep track of what is happening to an animal. After all, if the brain doesn't know about what is going on now, how can it be remembered later? Because of this, we expect brain areas that make new memories should keep track of what is happening to an animal as it happens. We trained some animals to drive around in a computer game. In this computer game we have the animals do the same things many times, and look at what each brain cell does each time they do it. Sure enough, we see brain cells that act the same way each time the animal does the same thing. Most often, this means that brain cells get excited each time the animal drives past the same spot in the computer game. Other times, brain cells are excited at key moments in the game. Even though our work can only look at brain cells one at a time, the fact that each cell keeps track of a little piece of what the animal is doing suggests that many of these cells work together to track all of what is happening to the animal. This is exciting, because it may tell us how the cells in the brain area that makes new memories might work together to help this brain area do its job.

The hippocampus and surrounding cortex are necessary for the formation of episodic memories, that is, memories of remembered events. However, it is unclear how activity of individual neurons supports mnemonic function. One possibility that the ongoing activity in the hippocampus tracks features of the animal’s experience, and the hippocampus supports memory by linking salient events into a continuous, unitary episode. To characterize task-relevant activity in the hippocampus, we trained monkeys to navigate a maze virtual reality. Our task has a highly repeatable structure, allowing us to study the activity of individual neurons as the monkey performs a consistent task. We have identified neurons with responses to the monkey’s position in virtual space. The spatial preferences of these neurons tend to cluster around the key events in the maze (start point, goal locations, etc.), emphasizing the important role that task structure plays in shaping hippocampal activity. Further, these data are congruent with the idea the hippocampus tracks consistent task features.

My project is the Smellicopter, which is a bio-hybrid autonomous odor localizing nanodrone. Commercially available chemical and odor sensors are not small enough or have fast enough response times to fly on a small drone, so I turned to nature. Moths rely on their sense of smell for finding mates and finding food, and they do so with astounding accuracy. So I have taken the antenna from the moth and attached it to a small electrical circuit which can measure the signal from the antenna when it senses odors. Using this, I’m able to program a drone that fits in the palm of my hand to use these signals to find and track odors to their source. Right now, my drone only smells scents that the moth is interested in, but we are working on genetically modifying the moth to be more sensitive to other odors, such as dangerous chemicals and odors from explosives.