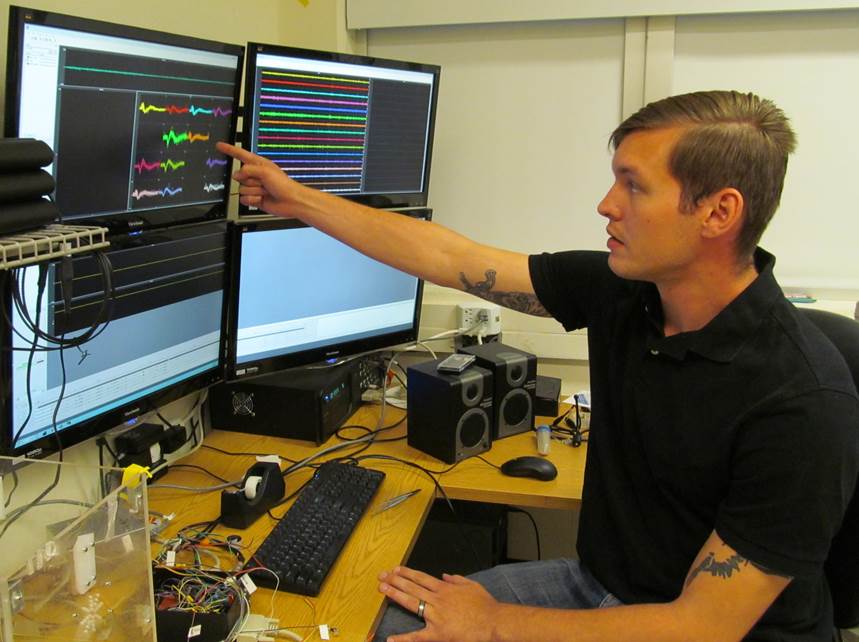 Sam Dreyer, 24, thought he might have a career in mixed martial arts, until he was knocked out in a fight and diagnosed with a concussion in 2010. The blow was intense enough that he didn’t recognize his fiancée, Noelle, immediately afterwards.

“That got me thinking about the brain and if mixed martial arts was something I wanted to be doing for the rest of my life,” Dreyer said. “I started reading up about the brain, found it super-interesting and thought, ‘maybe I should stop getting punched in the head,’” he said, chuckling. Noelle, now his wife, encouraged him to study up on the topic.

Dreyer was already studying bioengineering and had an interest in neuroscience at that time. More recently, early in 2014, he decided to Google neural engineering internships and came across the summer Research Experience for Veterans program at the Center for Sensorimotor Neural Engineering (CSNE).

“It’s such a small, new field and there are not a lot of well-established paths,” said Dreyer. “I fell in love with the concept of neural engineering, applied the same day and was lucky enough to be accepted.”

Dreyer spent 10 weeks last summer working in the lab of Chet Moritz, CSNE deputy director and an associate professor in the Departments of Rehabilitation Medicine and Physiology & Biophysics at the University of Washington.

Working in the Moritz Lab was a natural fit, and a change from the research he was doing in Chicago. “In Chet’s lab, I worked with rats and learned more about biological systems, whereas before my research was with PVC piping.” Dreyer said that he appreciated the unpredictable nature of rats and how it was more applicable to real life than computer modeling. “Having the unpredictable biological nature of research is really interesting.”

From high school to boot camp

Dreyer had enrolled in the military right after high school, attending boot camp and then joining the U.S. Marine Corps Forces Reserves. “I wanted to serve but then get back to real life as soon as possible,” Dreyer said. As part of his reservist duties, he spent some time in Iraq and is studying bioengineering at the University of Illinois at Chicago.

Dreyer has worked with physicians at the Rehabilitation Institute of Chicago, a world-renowned hospital and research enterprise in physical medicine and rehabilitation. His work extends beyond that of a student, really. Dreyer and two fellow undergraduate students built a model of an exoskeleton that someone with motor disabilities could use to help him or her them walk.

He also presented a new rehabilitative knee brace—the device uses surgical tubing or workout resistance bands—at the annual meeting of the Biomedical Engineering Society (BMES) in Texas last month. “We think the flex will help the knee rehabilitate faster,” Dreyer said. “That’s the ultimate goal and the best of both worlds.”

He is also leading a project to develop new 3D-printed prosthetics through E-Nable, a mechanical hand-maker movement inspired by two strangers that came together to create a prosthetic hand device for a child in South Africa.

And if that’s not enough for you, Dreyer will also serve as the project manager of his school’s Biomedical Engineering Society this year. As part of those duties, he will teach neural engineering concepts, using a SpikerBox, to freshman and sophomores.

With two years left in school, Dreyer has time to figure out where he’s going in the neural engineering realm. And the summer experience at the CSNE helped strengthen his interest, too.

“It was a dream come true,” Dreyer said. “I learned more in 10 weeks than I’ve learned in entire years in school. It was incredible to get hands-on applications and to see how a lab functions, how they carry out experiments and scientific research, applying engineering to the biology side. It was an incredible summer for me.”

In addition to working in a lab, veterans who participate in the REV program attend classes and lectures, and present research. Participants also receive a $5,000 stipend.

Applications for our summer research experience programs, including those for teachers and high school students, will be available soon on our website.