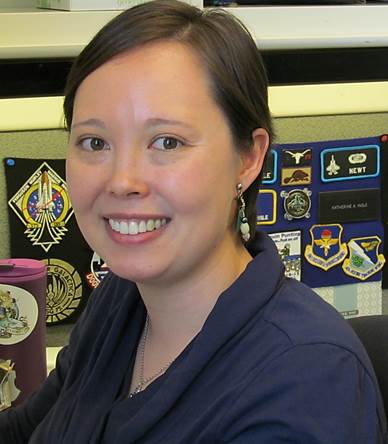 When Katherine Pratt was in the seventh grade, one of her assignments was to create a plot development of her life. She started with a beginning, added rising action events that led to a conflict, followed by the turning point, falling action and then resolution.

Pratt declared during this assignment that she was going to study electrical engineering, a plot point that is true today in real life. She is a PhD student in the Department of Electrical Engineering at the University of Washington.

She was interested in rockets and engineering as a child. “I knew electronics and then I discovered aerospace engineering and I thought, that’s even better,” she said. But the more she thought about it, she wasn’t sure how practical an aerospace career would be. “I wanted to go to space and I wanted to go to Mars,” Pratt said. “I wanted to explore the galaxy and a lot of that requires long-term planning. I realized that goal would take a long time. There are a lot more problems in the present that can be dealt with within a lifetime.”

So instead of focusing on far-away planets, Pratt is nurturing that interest in electronics and, more specifically, working on assistive technologies for people with neurological disorders. She’s designing systems to enable people with limited or no finger dexterity to manipulate touchscreens. “Being able to help people with disabilities and neurological disorders, that’s something we can definitely do within a lifetime,” she said.

Pratt’s research has been supported by the Center for Sensorimotor Neural Engineering since October 2014. She was the first student to enroll in the CSNE’s post-baccalaureate program, which was created to support students who are interested in neural engineering and who need support to earn necessary credits before applying to graduate school.

Pratt recently received a National Science Foundation Graduate Research Fellowship; she was one of 2,000 selected out of more than 16,000 applications. She graduated from MIT in 2008, worked as an intern at Blue Origin—an aerospace company created by Amazon.com founder Jeff Bezos—and then served in the Air Force for four years. As an undergrad, she was in ROTC. Pratt answered a few additional questions for us during a recent interview. An edited transcript is below.

Q: What advice would you give to an aspiring scientist or engineer?

In providing advice about college, I tell high school students that there are academics, social life and sleep. Pick two. You can vary them throughout the year, but don’t try to do all three at once. And go to office hours. I went to every office hour as an undergraduate. Most people didn’t take advantage of it. I got to know professors on a first-name basis and they knew I was invested in the work.

For younger students, I encourage them, if they have a passion, to follow it. You’re not going to know at the age of 10 what you want to do. But I try to make sure—in the case of my niece and nephew, for example—that they don’t feel hindered or limited to pursue what they enjoy. If they say they enjoy Legos, I say, “That’s awesome. Legos can be used for plays or to build bridges. I try to help people see that if there are restrictions on what they’re trying to do, how to break out of those restrictions.”

Q: What would surprise people about your research?

Pratt: The broad applicability. When I describe my research as helping someone who doesn’t have any fingers, many people think ‘amputation.’ But it’s also for people with Parkinson’s disease or rheumatoid arthritis. There’s Raynaud’s phenomenon; when it gets cold, you can’t move your fingers. Even if you don’t have one of these conditions, you might want to use a computer in an environment where you can’t set up a keyboard. The research I’m working on is for abled and disabled individuals. Anyone can use this if they need it.

Q: Who is your biggest hero and why?

Pratt: It’s not an individual person. It's the memory of women who came before me and couldn't do what they wanted to do. For example, the Mercury 13 was a group of women who were selected to go through the same medical and physiological screenings as the Mercury Seven astronauts, and they all passed.  But the program was never made official. These were women who had international flying records. These were very sharp women. But because they were women and it was the late 1950s, they were dismissed. That really was completely unfair. If I can do something that others before me couldn’t do, it carries on the legacy of trying to make the world a better place for young women who come after me

Q: Why should people care about your research?

Pratt: Because it’s cool. (Pratt smiles, and then gets serious.)

It will help a lot of people. The inability to get on the Internet is a big deal. Everything is on smart phones. Everything is online. There are digital forums. If you have to print something or scan it, and if people don’t have access to that domain, you’re getting cut off from a lot of technology. Everything has touchscreens. I’ve seen refrigerators with touchscreens. Being able to let people interact in the technological world is important.

Katherine works in the BioRobotics lab at the University of Washington.