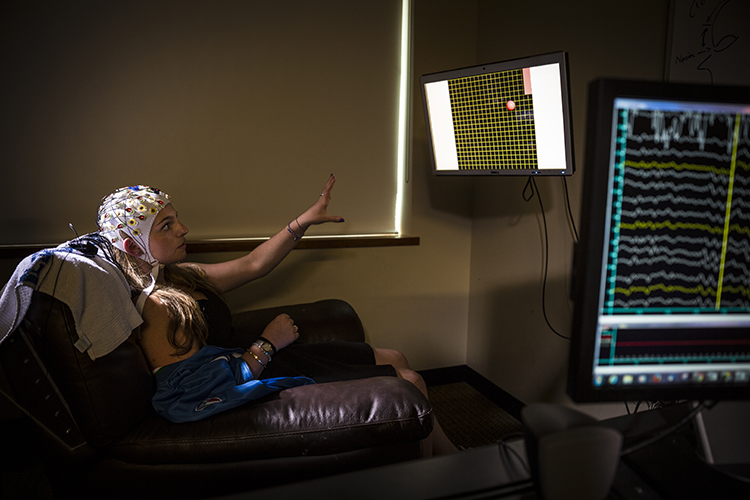 As a fourth-year PhD candidate in the University of Washington’s Graduate Program in Neuroscience, Kaitlyn Casimo is fascinated by learning, but not in the traditional sense of the word.

Casimo is interested in how the whole brain is affected after a person learns to use a brain-computer interface (BCI), a device that interacts with the body’s nervous system and can potentially be used to restore function in people with severe motor disorders. Her research project at the GRID Lab, which is affiliated with the Center for Sensorimotor Neural Engineering (CSNE), investigated how learning to use a BCI affects connectivity in the brain beyond the BCI implantation site.

“I was interested in how the changes associated with learning a complex skill spread beyond direct locations that are obviously involved – in this case, motor areas – [in] areas that are far from each other physically, or associated with dissimilar cognitive processes,” Casimo said.

Casimo was the lead author on the paper “BCI Use and Its Relation to Adaptation in Cortical Networks,” that published in March 2017. This research explored how proficient use of BCIs can lead to changes in brain activity, and if changes due to learning how to use the BCI persist after the person is no longer actively engaged with the device.

“There is a rich literature on how various portions of the brain work together to facilitate motor learning tasks, but relatively little is known about whether and how these same scaffolds are used in BCI skill acquisition,” said Jeremiah Wander, a previous graduate research assistant in the GRID Lab and current researcher with the Medical Devices Group at Microsoft Research. “We wanted to investigate [this] exact question.”

This project was completed in collaboration with Dr. Jeffrey Ojemann, the lab’s principal investigator, Kurt Weaver, who is a research faculty member in the lab, and Wander. 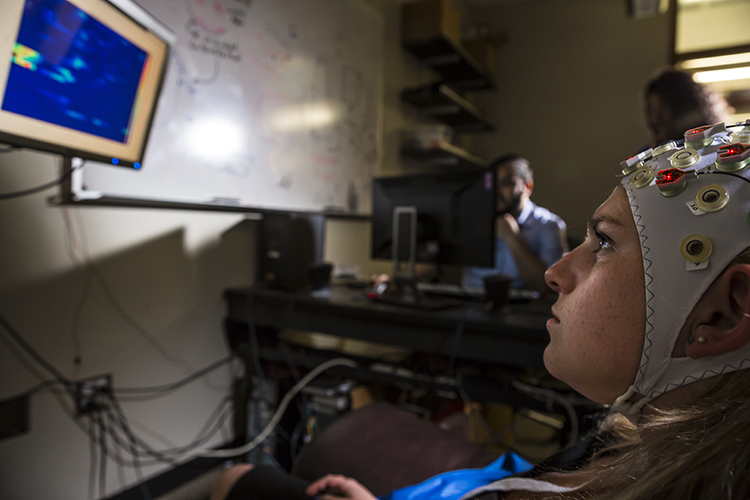 The process of learning to control a BCI can be cognitively challenging for users because they are asked to consciously control their own brain activity. This learning process can result in major alterations in function of the prefrontal, premotor and parietal cortex over a period of hours or days.

“From the scientific perspective, [a] BCI provides an opportunity to challenge the brain with a completely novel task while observing how the brain adapts, and what (if any) existing learning scaffolds it harnesses to address the challenge,” Wander said. “From a clinical/engineering perspective, learning a complex BCI is non-trivial. If we had a mechanism for understanding when a learning plateau has been reached and the complexity of the task should be increased, we could possibly accelerate the rate at which BCI users developed proficiency and/or increase their eventual maximal capability.”

Casimo’s research explored changes of the motor cortex in four individuals who were trained on a BCI with a control site located in their motor cortex. This study used electrocorticography (ECoG), a technique that uses electrodes on the surface of the brain to record neural connectivity. These measurements were used to quantify connectivity changes in the brain due to BCI learning.

The paper’s findings noted the presence of changes in resting state connectivity across the cortex after BCI learning, as well as changes in connectivity beyond the BCI control site. Casimo said that these findings provide a holistic look at the way the whole brain is impacted by BCI use.

“We want to understand how learning works in BCIs because 1) we need to understand the entire BCI system, and that includes the activity in the entire brain, and 2) we want to make sure that learning occurs in a predictable and reliable fashion,” Casimo said. “[This research] lays the groundwork for potential later products to [be] engineered using that knowledge of how brain signals are changing beyond the BCI control site.” 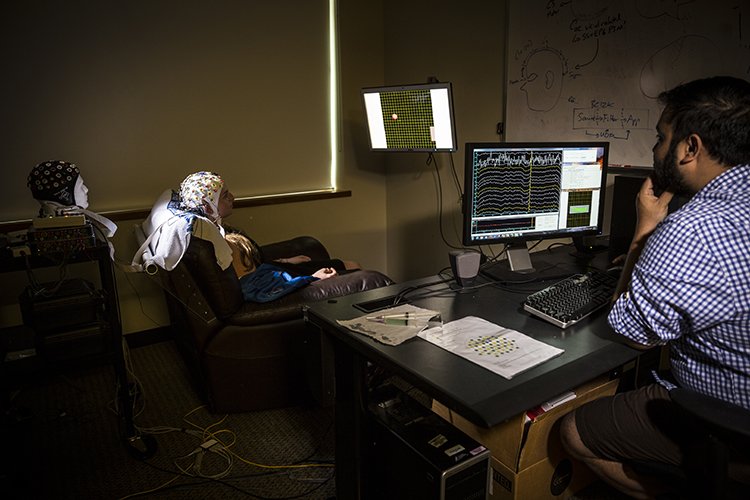 Other co-workers in Casimo’s lab are currently developing more fundamental components of a BCI system that can inform future iterations of this technology. Although Casimo’s research project focused on foundational research related to BCIs, it is still an integral part of understanding how a BCI influences a user’s brain.

“The brain's capacity for plasticity is tremendous, and the better we can learn to support that plasticity – through intelligent design of BCI architectures, training paradigms, interface technologies, etc. ­– the sooner we will have clinically-valuable BCI systems,” Wander said.

The GRID Lab encourages collaboration across departments on its projects, as evidenced by the work of graduate students from neuroscience, bioengineering and computer science on this project and others.

“One of the great things about the CSNE is that it breaks down department and disciplinary barriers because neural engineering is an interdisciplinary question,” Casimo said. “You have to have engineers, neuroscientists, ethicists and psychologists on board to answer the complex questions and develop the complex devices that we’re trying to [create].”

In addition to conducting research, Casimo is passionate about public outreach and making her work accessible. During the 2017 – 2018 academic year, Casimo will serve as the inaugural outreach coordinator for the Student Leadership Council at the CSNE. In this role, she will offer training and workshops for CSNE faculty, staff and student members at the undergraduate, graduate and postdoctoral level.

“We want to have an impact on people’s lives at the CSNE, and part of having direct impact involves people understanding the science. I personally believe that understandable science should be accessible to anyone,” Casimo said. “One effective way to make that happen is through public research and making sure people have opportunities to understand science and ask questions.”

To learn more about this project and BCI learning, contact Kaitlyn Casimo.