Simulating the sense of touch by stimulating the brain with electrodes. Decoding signals within the brain’s network of approximately 86 billion neurons. Testing technologies to help the brain heal. Exploring new interfaces between brains and computers.

Graduate and undergraduate researchers from various departments at the University of Washington (UW) discussed these topics and others this year in an online session dedicated to encouraging neurodiverse high school students to explore neural engineering and neuroscience.

Hosted by the Neuroscience for Neurodiverse Learners (NNL) program, the event featured short talks by five student researchers, with time for questions from the audience. The high school students in attendance displayed their interest and curiosity with insightful questions for the presenters.

NNL is an NSF-funded collaboration between the UW Center for Neurotechnology (CNT) and the Disabilities, Opportunities, Internetworking, and Technology (DO-IT) Center. Focusing on topics in neural engineering and neuroscience, NNL provides direct and hands-on experiences to neurodiverse high school and early postsecondary students. The program defines neurodiverse learners as those who have academic challenges related to conditions such as dyspraxia, dyslexia, attention deficit hyperactivity disorder, dyscalculia, autism spectrum disorder, and Tourette syndrome.

The CNT’s executive director, Dr. Eric Chudler, who serves as the NNL project’s education director, mentioned, “NNL students come from a variety of backgrounds and have unique strengths and insightful ways to approach problems.” Dr. Chudler, a research associate professor in the UW Department of Bioengineering, is no stranger to scientific curiosity, and it’s a quality he appreciates in each NNL student. “Through our summer camp and workshops during the school year, these students have posed very interesting and creative questions about the brain and how neuroscientific research should be conducted,” Chudler said.

The event began with brief introductions by DO-IT's Tami Tidwell, an NNL leader who helps students navigate project opportunities and summer camp experiences. “When I think about neurodivergent learners in STEM, I think of a wide variety of strengths that differ from person to person, such as creativity, focus, and direct communication,” shares Tidwell. “Too often, people make assumptions about what these students can and can't do well. One of our goals is to help students and educators understand the value that neurodivergent individuals bring to the classroom, the workplace and the world." After introductions, panelists shared 5- to 7-minute presentations about their backgrounds and the focus areas of their research.

Courtnie Paschall, an M.D./Ph.D. bioengineering student in the Medical Scientist in Training Program at the UW, spoke about the route she took to the UW by way of undergraduate degrees in physics and neuroscience. She encouraged students to imagine the underpinnings of both physics and neuroscience. The two fields, she shared, offer “two different ways of exploring reality. Physics is a way of exploring fundamental material reality and trying to describe it in predictable equations or statistical representations. And then neuroscience is asking how the human perceives reality. We wake up and interact with the world and have to piece together what it means … how we integrate all of these different senses, how we make predictions and move forward in the world.”

In her presentation, Paschall oriented the NNL students to what she termed a “brain map”—a diagram of the brain areas associated with different functions and processes. Paschall’s research zeroes in on the part of the brain responsible for the perception of touch. Her presentation described experiments that approximated the feeling of touching an object by directly stimulating the brain with electrodes. Recently, Paschall and colleagues in the UW GRID lab have been working on fine-tuning the sense of a synthetic touch to see if it can be perceived more specifically—such as feeling “bumpy” or “smooth” to research participants.

After Paschall’s talk, NNL students wanted to learn more about how to simulate touch with electrodes and without having a subject actually touch something. Students also asked about showing subjects images of objects when they simulated touching those objects.

In the second presentation, fourth-year Ph.D. candidate Samantha Sun, who focuses on computational neuroscience in the GRID lab, shared how she had gone straight to graduate school from an undergraduate degree in bioengineering. She showed slides of graphed signals with spikes that depict the recorded activity of different regions of a brain connected to electrodes. Sun’s research team deciphers such brain signals in attempts to relate them to a subject’s behaviors, body movements, speech, and even moods.

The audience had particular interest in how the moods of research subjects are recorded (through real-time surveys), how Sun attempts to correlate the graphs to moods, and what types of computer programming code and knowledge is required.

Next up, Lila Levinson, a fourth-year graduate student in UW’s neuroscience program, who attended high school in Seattle and then earned an undergraduate degree on the East Coast, spoke about her work in the GRID lab on understanding how to help the brain heal after an injury such as a stroke. Through animated flow charts, Levinson illustrated the pathway a signal might travel from the brain to the body and how the brain might learn—through rehabilitation—to rewire itself to bypass an area damaged by injury. Levinson’s motivating question was whether electrical devices could be implanted to accelerate that process of rewiring known as “plasticity.”

One NNL student asked a perceptive question about whether a section of brain that takes over the function of a damaged portion might then have trouble managing its own function—to which Levinson replied, in essence, that the brain does likely have to reorganize signals in more than one area as it compensates for a damaged portion.

Toma Itagaki delivered a fourth presentation. Itagaki, a third-year UW undergraduate student who went to Tesla STEM High School in Redmond, Washington, studies electrical and computer engineering as well as neuroscience. He described working after high school for a company called White Matter LLC, a CNT Industry Member that develops neuroscience research tools. More recently he has worked in the UW Orsborn Lab on decoding the neural signals associated with a grasping hand movement. At the Ubiquitous Computing Lab at the UW, Itagaki has started exploring technologies informed by neuroscience that consumers might use one day. After his talk, Itagaki provided the audience some perspective from his work for a neurotechnology company—he highlighted the importance of understanding the fundamentals of neuroscience even in non-academic environments such as a for-profit company.

Maneeshika Madduri, a third-year Ph.D. candidate studying electrical and computer engineering at UW, was the final presenter. She spoke about her diverse background experiences that include both a bachelor’s and a master’s in electrical engineering from Stanford University, plus work for the medical-devices startup Cala Health, the Sandia National Laboratories, and the UW Orsborn Lab.

Madduri described existing brain-computer interfaces (BCIs) that pick up on users’ neural signals to control devices that help with communication or augment motor functions for people affected by neuromuscular disorders. Her own research seeks to improve BCIs by designing them to be easier to learn to use or control—and durable enough to last for a person’s lifetime. 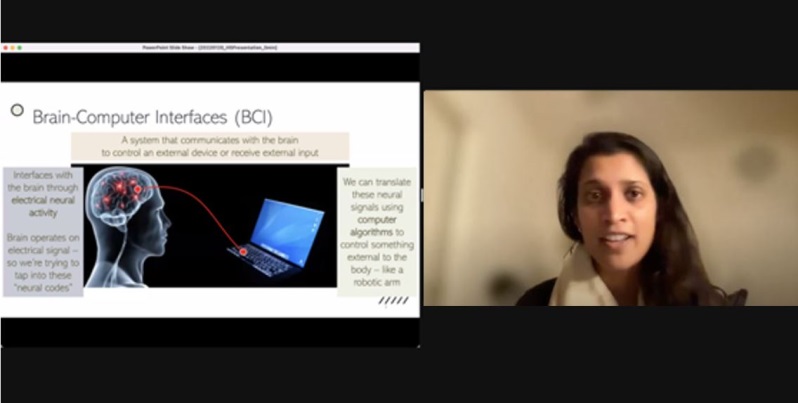 A student asked Madduri how much computer coding she does—a lot!—and other audience members quizzed her about a BCI she had mentioned that generated writing through neural signals—whether the part of the brain this BCI connects to has to have language and motion capabilities and whether two people might communicate just by thinking with such devices. Madduri noted recent experiments in these areas, including an experiment with brain-to-brain interaction conducted by UW researchers including CNT co-director Dr. Rajesh Rao.

Following the presentations, an open-ended discussion period led to several questions from the student audience about how to choose a college if you have interests in research. Presenters pointed out some strengths of the university system being large enough to tackle the exploration of the brain from different angles, including psychology and also neurotechnology, computational neuroscience, and traditional cellular or “wet lab” neuroscience.

One student sought advice for finding a right-fit college in terms of size. “I want to make sure that … I don’t feel stressed out about the large size of a class, and I don’t want to feel lonely in a tiny-sized class either,” she said. Panelists responded helpfully, discussing the many factors going into choosing a college—including size, location, and academic areas of strength. They also gave advice on ways to fund their studies, possibly through financial aid and possibly through working for a company that can then pay for training.

For more information about the Neuroscience for Neurodiverse Learners program, visit the NNL website hosted by the DO-IT Center. NNL is funded by the National Science Foundation (#1948591). The PI and Co-PI are UW Drs. Sheryl Burgstahler and Rajesh Rao, respectively.

Ben Raker is a Public Information Specialist at the University of Washington. Scott Bellman is the NNL Project Director and DO-IT Center Manager.