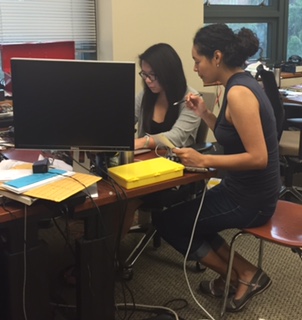 Most high school students would be fortunate to land an internship during their four years of school. But Larissa Ho, a recent graduate of TAF Academy in Kent, Washington, has had four summer internships, including a stint at Google.

Her most recent internship was a lab-related experience known as the Young Scholars Program at the Center for Sensorimotor Neural Engineering.

Ho starts school at the University of Washington next month; the 10 weeks she’s spent on campus this summer have provided a head start of sorts for the fall. “I know all of the good places to eat and good places to grab coffee,” she said. “I’m really excited.”

The ambitious young woman spent her summer in the Neural Systems Laboratory, which is led by UW Professor Rajesh Rao (also the CSNE’s director). Her mentor was Nile Wilson, PhD student in the Department of Bioengineering.

Her task for the summer? Studying brain-computer interfaces (BCIs) and finding a way to make the devices adapt to the person using them more easily. “With BCIs, when a user makes a mistake, they obviously know it’s a mistake, but the device doesn’t know there’s a mistake happening,” she said.

BCIs can potentially be used to replace or restore function in people with neurological or severe motor disorders.

Ho created a game that introduced errors on purpose, so that when a person played the game, she was able to read the signals from an EEG (electroencephalography) cap—which a person wears when using this particular BCI—and see where the error-related neural signals were coming from when the error occurred.

When she described the research, Ho sounded like an expert, after only 10 weeks in the lab. “This is my first time using this stuff,” she said. “I’m using an application called Unity to create the game, and I never used that before. I never used the EEG cap before, so it’s pretty interesting being in the lab, experiencing new stuff.”

Ho said that at first, she was confused about the lingo and subject matter. But as the weeks went by, she started picking up the language and began to understand people’s presentations in the lab.

What helped her adapt quickly? “For me, probably the biggest thing was not being afraid to ask questions when I was stuck,” she said.  “I realized that graduate students working in the lab are here to support me when I’m stuck.”

Wilson said that Ho found a perfect mix of independence and willingness to ask for help. She also said that Ho’s previous internships helped her excel. “Leading the Girls Who Code group in high school, and having a passion for this kind of research really showed,” said Wilson.

Ho said working in the Neural Systems Laboratory opened up her eyes to what really takes place in research. “I never thought that research could apply to technology or computer science,” she said. “I thought it was all lab work with pipettes. Being in the Computer Sciences & Engineering building and atmosphere at the UW really changed that.”

Ho said she hasn’t yet decided on a major, but she’s leaning towards computer science and hopes one day to become a software engineer. “I have a passion for technology, but I want to find ways that I’m able to use that passion to make the world a better place,” she said. “Being able to learn more about BCIs is helping me go towards that direction.”

Ho’s work this summer was supported by the National Science Foundation through the Young Scholars Program. In addition, she received support from the Army Educational Outreach Program’s Research & Engineering Apprenticeship Program, a summer STEM program for high school students.