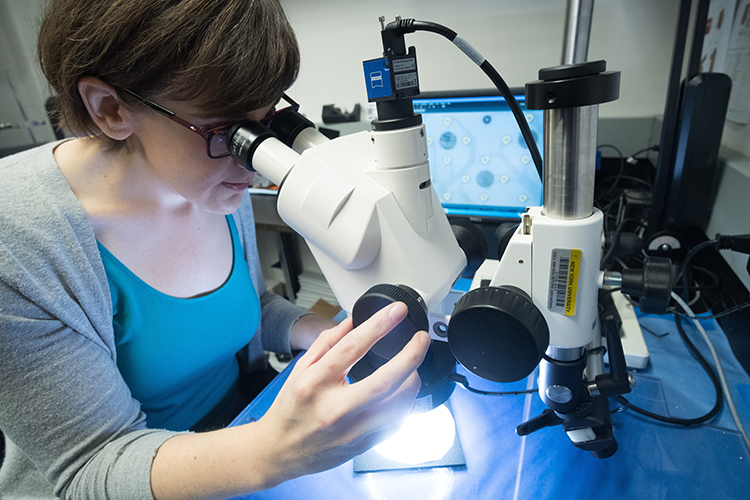 In 2018, Amy Orsborn joined the University of Washington (UW) as a CNT-affiliated faculty member and Clare Boothe Luce Assistant Professor in the Department of Electrical & Computer Engineering and the Department of Bioengineering. She has worked on a range of research projects studying brain-computer interfaces (BCIs), but her interest in neurotechnology began in 2006 after attending a lecture by Eberhard Fetz, a CNT member and professor in the UW Department of Physiology and Biophysics. Fetz’s talk focused on how neural activity can control an external device such as a prosthetic limb through a BCI.

“I read everything I could find, and I went on to do my PhD working in that realm,” Orsborn said. “The more I learned, the more I continued to be fascinated by the brain and its flexibility in learning.”

Orsborn received her PhD from a joint graduate program at the University of California, Berkeley and the University of California, San Francisco. She conducted research in the Carmena Lab that focused on developing a co-adaptive BCI system where the BCI uses machine learning to adapt to the user’s needs, which improves the BCI system’s performance. Machine learning allows the neural device to adapt based on how the brain is learning.

Orsborn went on to receive her post-doctoral training at New York University’s Center for Neural Science. There, she created implants that monitored neural circuits in non-human primates, and in 2016, she was selected for the L’Oréal USA for Women in Science post-doctoral fellowship for this research.

Orsborn’s current work in the Orsborn Lab at the UW reflects her interdisciplinary education at the intersection of engineering and neuroscience.

“You have to be able to speak two languages and synthesize ideas across different fields. [This] comes with challenges, but that’s exactly why it’s exciting,” Orsborn said. “It expands and bridges [fields], and that’s what I find really rewarding.”

The goal of her current research is to develop adaptive neural interfaces and identify new techniques to study the brain using BCIs. Neuroscientists are still deepening their understanding of how the brain adapts when learning to use a BCI to control an external device, so it can be challenging to develop a neural device that adapts based on the person’s movement or intention to move.

“The brain is always changing, and it’s not a hardware circuit,” said Si Jia Li, a first-year PhD student in the UW Department of Bioengineering who rotated in Orsborn’s Lab. “You don’t have a fixed input-output relationship, so learning is always happening.”

Another aspect of Orsborn’s research is studying neural circuits in awake primates, which is essentially studying how the brain adapts to change. Orsborn said that studying both brain adaptation and BCI system adaptation contributes to the foundational understanding of how the brain works and how neural devices interact with it.

“The hope is that these two threads [of research on brain adaptation and system adaptation] talk to each other,” she said.

“My experience with physical disabilities gave me a deep appreciation for how important movement is in our daily lives,” Orsborn said. “The possibility of improving the lives of people who have a motor disorder … keeps me moving.”

As researchers learn more about the interaction between the brain and a co-adapting neural device, engineers can use this knowledge to develop smarter brain-controlled prosthetics. For example, this neurotechnology could benefit an end user by supporting fine-tuned control over their artificial limb. Orsborn also keeps end users in mind throughout her research process.

“We want these devices to be intuitive and work well for everyone and anyone, regardless of how they interact with a device,” Orsborn said. “When we design algorithms that interact with adaptive systems, we want to make sure that the algorithms don’t make assumptions about how someone will use [a neural device].”

A culture of collaboration

Orsborn is still growing her lab team, but she hopes to bring in researchers who can contribute their expertise on how the brain works as well as new concepts and ideas from engineering. For example, Li brought his experience in both ultrasound research and medical imaging, which he applies to brain-image processing in Orsborn’s lab.

“The main advantage is that everyone can bring their background to this research. Because I [worked in] medical imaging, I like to use visualizations and graphs in my analysis,” Li said. I’ve been [working alongside] Tomek Frączek, a first-year student in the UW Graduate Program in Neuroscience, and we can share knowledge and skills.”

Li has been rotating through research labs as part of his PhD program, but he hopes to continue conducting research in Orsborn’s lab.

“I want to stay in Amy’s lab because it’s a hands-off style while still being supportive,” Li said. “Amy really understands neural signals and innovative methods, and that’s been very helpful to my project.”

As a researcher and mentor, Orsborn is a valuable part of the CNT community, and she appreciates learning from CNT collaborators.

“Through the center, I have talked with Dr. Jeffrey Ojemann, [a co-principal investigator for the CNT-affiliated GRID Lab], and Raj Rao, [the CNT’s co-director and also a principal investigator for GRID Lab]. Since I work with animal models, there’s potential and excitement around taking ideas from the lab to the clinic,” Orsborn said. “The CNT has been fantastic about facilitating discussions and approaching thinking about similar questions from different perspectives.”

Learn more about research in the Orsborn Lab on its website, and check out Orsborn’s recent talk at Microsoft about re-engineering BCIs to optimize control and learning.