The Center for Neurotechnology (CNT) is helping to educate the next generation of neural engineers by mentoring students taking part in the 2018 NWABR Student Bio Expo, a year-long program focused on biotechnology, biomedicine and bioethics. 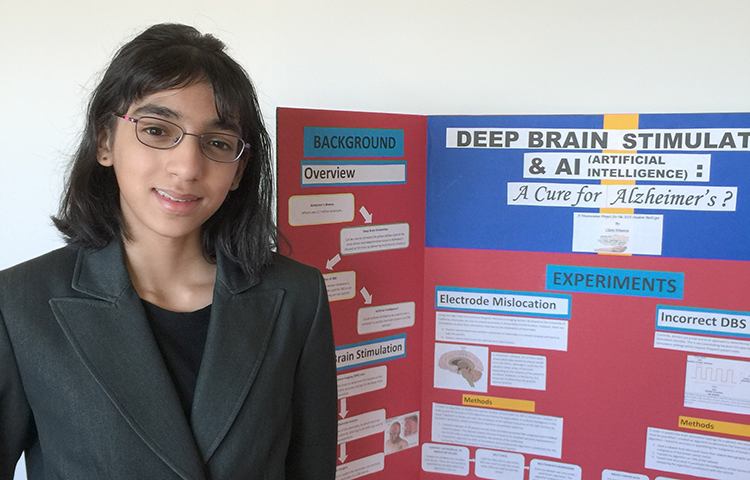 This year, the CNT began a new partnership with the Northwest Association of Biomedical Research (NWABR) by mentoring high school students taking part in the 2018 NWABR Student Bio Expo. The Expo is an educational experience designed to meet Next Generation Science Standards, and it aligns closely with the CNT’s goals by supporting pre-college neural engineering education and exposing students to potential career choices in the neurosciences. The program ran from October 2017 to April 2018, and 300 students from Puget Sound-area high schools such as Ballard, Roosevelt and Shorecrest participated. Students chose from 16 different categories, such as Molecular Modeling, Lab Research, Multimedia, and Neuroscience, to build projects that creatively demonstrated what they learned during the program. The students’ final presentations took place in a culminating event on May 18, 2018, at Shoreline Community College, where their projects were judged by local scientists.

The CNT provided 22 graduate student and faculty members to mentor Expo participants who opted to be paired with a local scientist in the Neuroscience category. Mentors offered feedback and coaching on aspects of the students’ research projects and kept in touch with the students by email, Skype or in-person. The time commitment by the mentor was, on average, four to eight hours per student.

“What impressed me about the mentorship of these high school students is that a small investment of time from a mentor can have a big impact on a high school student,” said Janis Wignall, CNT precollege education manager and manager of the Expo for NWABR. “Most of these students have never met a scientist. Then, with the help of their mentor, they become empowered to be a scientist!”

Claris Winston, a 10th grade homeschooled student from Seattle, was mentored by the CNT’s Executive and Education Director, Eric Chudler. Winston’s project, “Deep Brain Stimulation and Artificial Intelligence: A Cure for Alzheimer’s?” used a creative cartoon video to explain how machine-learning algorithms could guide deep-brain stimulation treatments for Alzheimer’s disease toward better patient outcomes. Her research for the project was also informed through an interview she conducted with CNT member, Howard Chizeck, who is a leading expert on using deep-brain stimulation to treat conditions such as essential tremor and Parkinson’s disease.

Winston won third prize in the Neuroscience category for her project, and she will be participating in the CNT’s YSP-REACH program this summer.

“Claris is a great example of how a little bit of guidance can go a long way toward igniting a student’s passion for science. She took her project to a level of depth and scholarship that I didn’t expect, and I was impressed,” Chudler said. “I look forward to the CNT participating in this productive partnership with the NWABR again next year.”

Recruitment for CNT graduate students and faculty members to mentor high school students for the 2019 NWABR Student Bio Expo will begin in September 2018. For more information about student recruitment or the CNT/NWABR partnership, contact Janis Wignall.