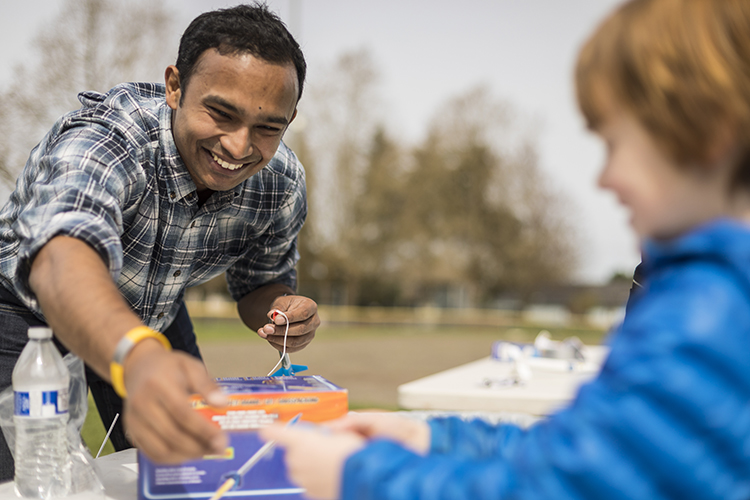 Gaurav Mukherjee has been an active participant in the CNT and the neural engineering community at the UW for over three years, and he is paying forward the support he’s received by mentoring others.

Gaurav Mukherjee, a University of Washington (UW) fourth-year doctoral student in the Department of Mechanical Engineering, has been involved with the Center for Neurotechnology (CNT) since he first arrived on campus. Within a relatively short time span, he has made a large number of connections and participated in many aspects of the neural engineering community at the CNT and the UW. Most recently, Mukherjee has been studying and working in the labs of CNT member, Eric Rombokas, and Patrick Aubin at the Department of Veteran Affairs Rehabilitation Research and Development Center for Limb Loss and MoBility where he is designing mechanical interfaces between humans and machines. Mukherjee’s research focuses on engineering better electromechanical interfaces for the human hand to augment function for users spread across a spectrum. His research spans promoting function after injury to the sensorimotor system, to augmenting natural interaction with virtual environments. To those ends, he has worked on developing a deeper understanding of joint biomechanics of the human hand and how paralysis due to spinal cord injury affects joint stiffness. Currently, he is studying the role of sensory feedback in developing better interfaces between the human hand and machines such as exoskeletons and prostheses. 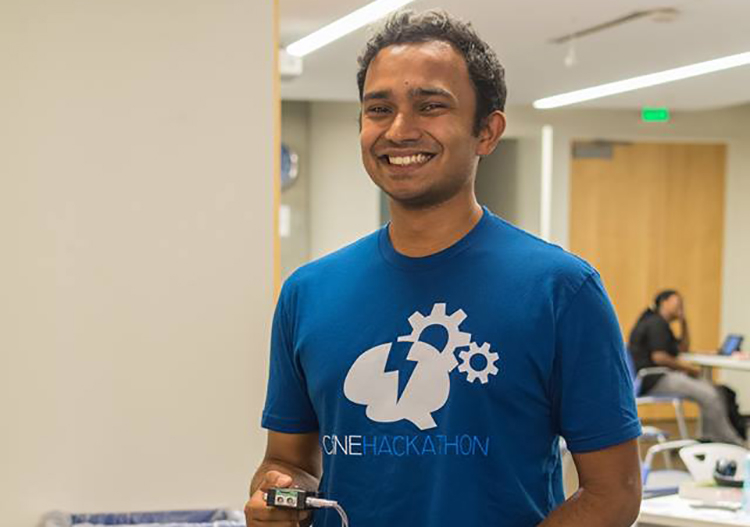 Mukherjee worked earlier this year as a teaching assistant for UW Mechanical Engineering Professor, Brian Fabien, interned last summer with the CNT’s industry affiliate, Oculus Research, and prior to that, spent three years working in the lab of CNT member, Kat Steele. There, he studied the challenges associated with hand function after injury to the central nervous system, specifically in regard to cerebral palsy and spinal cord injury. During that time, Mukherjee organized a unique hackathon with Steele called “The Seattle Handathon,” received fellowships through the UW Institute for Neural Engineering (UWIN) and the American Association for the Advancement of Science (AAAS), participated in the CNT Hackathon and mentored students who were part of the CNT’s Research Experience for Undergraduates program. He even named the CNT’s website blog.

“My work is not funded by the center; however, through various interactions with students and professors who are part of the CNT, I’ve come to consider myself as part of the community.” Mukherjee said. “I’m always enthralled by the variety of research conducted at the center, and particularly enjoy being able to chip-in and listen to different perspectives surrounding sensorimotor and neural engineering. I feel happy to be associated with this community.”

The support Mukherjee has received from CNT members since he arrived at the UW has had a strong impact, not only on Mukherjee himself, but also on the students he has mentored through educational outreach both inside and outside of the CNT. 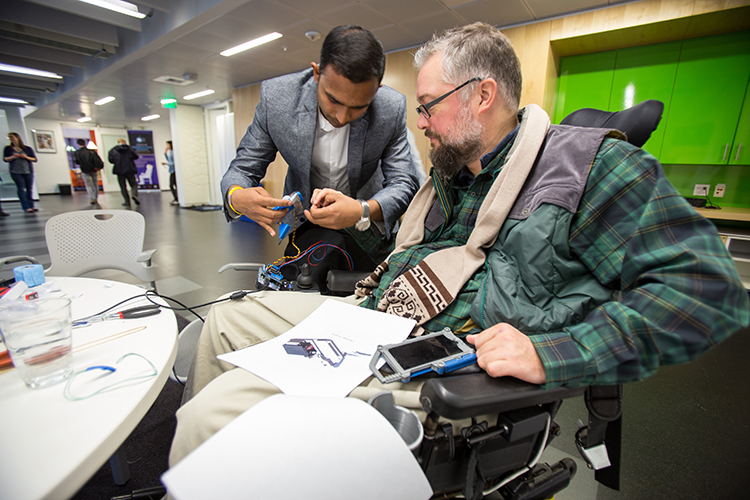 Last spring, Mukherjee participated in the UW’s Neural Engineering Tech Studio, a course/competition created and facilitated by the CNT to help students apply engineering principles to independent projects with potential medical and commercial applications. Class participants were organized into competing teams, each of which was mentored and led by a graduate student who provided guidance on how to best approach an engineering design project. Industry mentors provided advice on how to turn the teams’ projects into a commercially viable product.

As the graduate student who led the winning team, Mukherjee applied what he learned about hand function in Steele’s lab to development of a novel assistive device his team titled “NEO-Grasp,” with the acronym NEO being short for “Neural-Engineered Orthosis.” 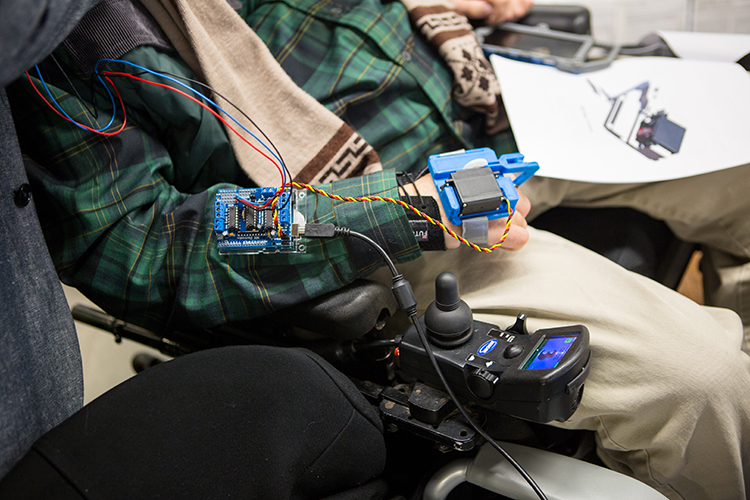 “NEO-Grasp is a hand orthosis, a brace that is motorized and is controlled with electrical signals emerging from the surface of the user’s functional muscles in order to enable them to grasp and release objects,” Mukherjee described. “It is aimed at individuals who have a spinal cord injury of the cervical region, which precludes them from moving their fingers. It sits on the dorsal surface or the top of your hand, and it positions your fingers so that you can grasp or release an object. All of this is driven by the individual themselves. Because they have a paralysis of the hand, we source the signals that drive this device from different muscles they have voluntary control of.”

Mukherjee’s role on his team, which included UW students Aishwarya Mandam and Lok “Larry” To, required working with and mentoring undergraduate students at different educational levels and from different engineering disciplines. The group had to work together to generate a competitive idea, chart a development path that would fit within the course’s time constraints and build a working, functional device. 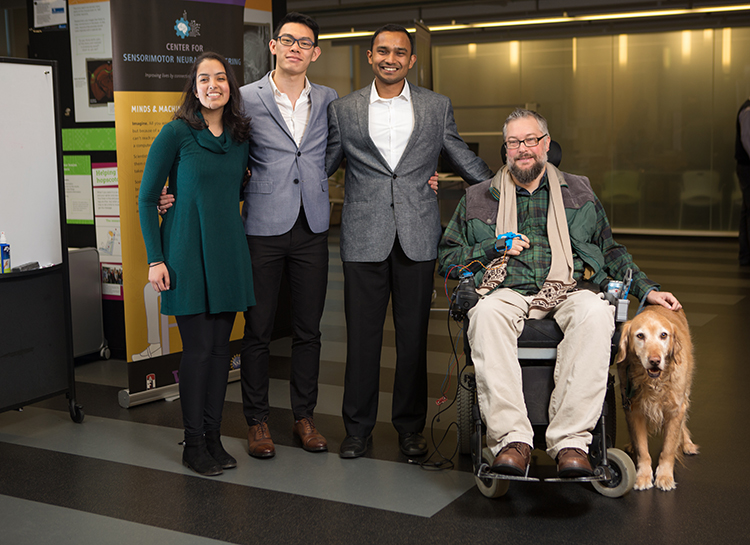 “I learned how to manage a team, how to appreciate everyone’s individual aspirations and keep the team on-board, but how, also at the same time, to deliver on the end goal that we had,” Mukherjee said. “We had to engineer that device through building prototypes, taking in user feedback, testing really quickly, going back to the drawing board, testing repeatedly and coming up with a solution. We were able to do that within the span of one quarter. The experience was amazing!”

Because Mukherjee’s team won the class competition, they are working now with the CNT’s Director of Industry Relations and Innovation, Scott Ransom, and UW CoMotion to further explore the commercial viability of taking their idea and device to the marketplace. 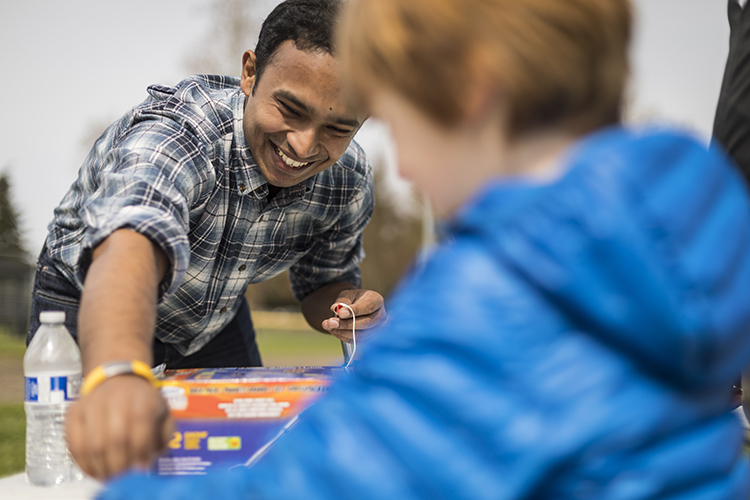 Outside of the CNT, Mukherjee has taught a neural engineering class for high school students with CNT student member, Kaitlyn Casimo, and worked with high school teachers through the Washington Alliance for Better Schools to help bring science, technology, engineering and math (STEM) activities to the classroom. He was also a research assistant with the Northwest Earth and Space Sciences Pipeline (NESSP) from January to June 2017, where he was part of a team dedicated to bringing STEM education to K–12 students in traditionally underserved Native American, Latino and African-American communities. Mukherjee’s role included facilitating STEM outreach showcases in Idaho, Oregon, Montana and Washington, the four states that are part of the program. 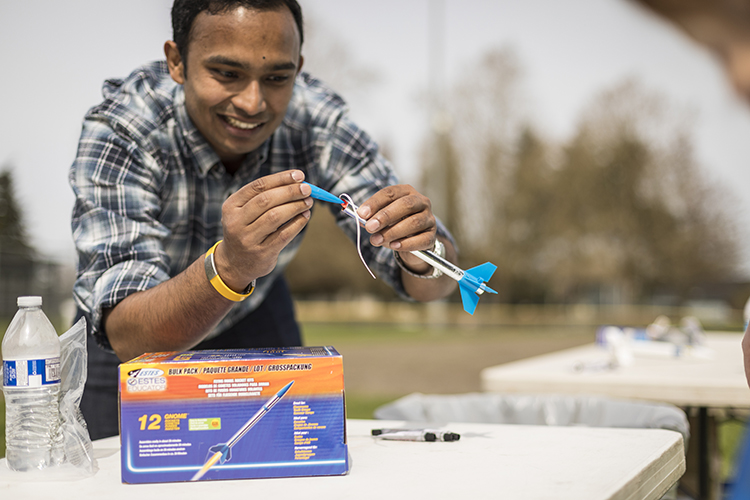 “In any given week, there was usually a showcase that I would drive out to. We then would help the kids build rockets, build high-altitude balloons or programmable robots, demonstrating to them how the very principles that they learn in class about physics, mathematics and chemistry can be leveraged to make these tangible things and understand these principles hands-on,” Mukherjee said. “The idea is to engage the community and bring these kids into the fold of science, technology, engineering and math. Professor Winglee and the team at the Northwest Earth and Space Sciences Pipeline have successfully built a bridge between the community and the University of Washington. I feel fortunate to have had the opportunity to work with such a driven team.”

The CNT has given informal support for Mukherjee’s efforts in this area by providing him with student activity kits, as well as instruction and mentorship from the CNT’s Executive and Education Director, Eric Chudler.

“I always look forward to talking to Gaurav. He brings such enthusiasm to his work,” Chudler said. “You can tell he has a passion for education, and he serves as a great role model for younger students.” 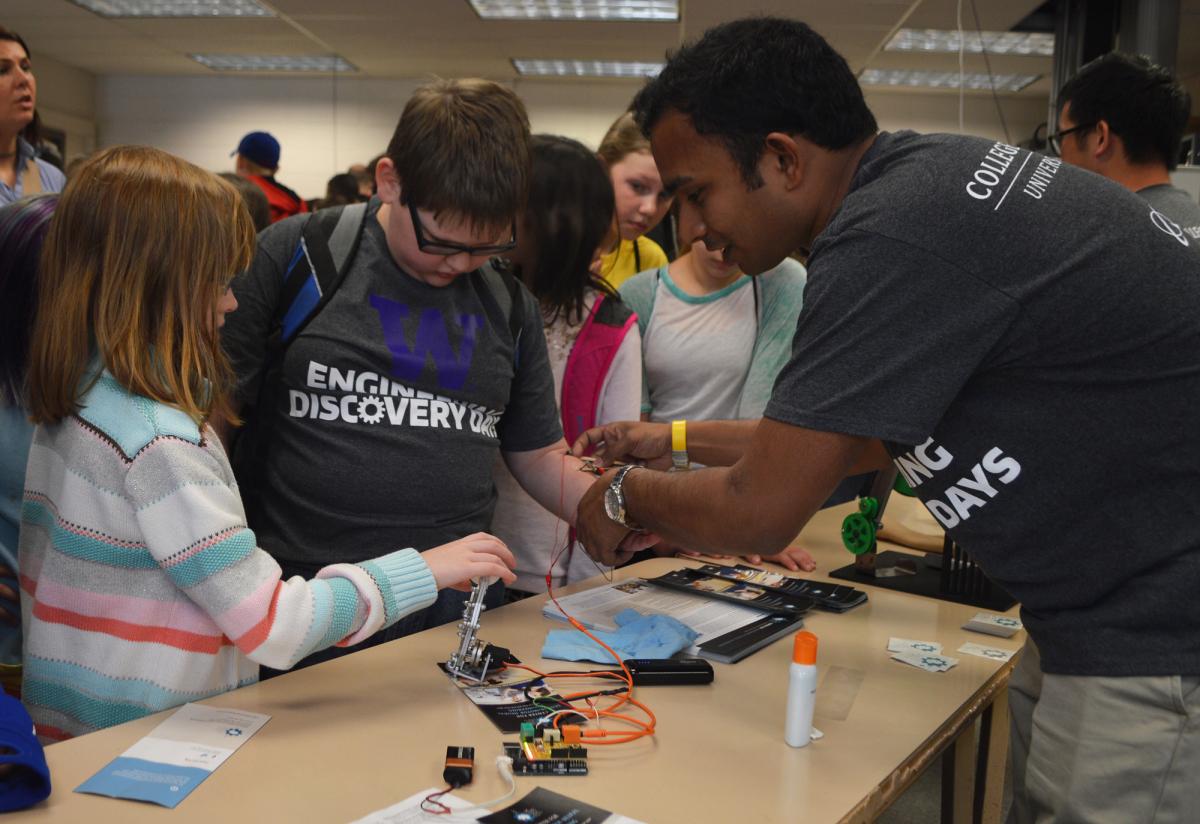 At the UW, Mukherjee helped represent the CNT at the UW College of Engineering’s annual Engineering Discovery Days, which shares work from all UW engineering departments with 4th to 8th grade students, teachers, their families and the community. Mukherjee engaged students at this event in hands-on activities that demonstrated neural engineering principles, such as a robotic gripper powered by muscle nerve signals. He also answered questions about neural engineering and provided more information about the CNT. 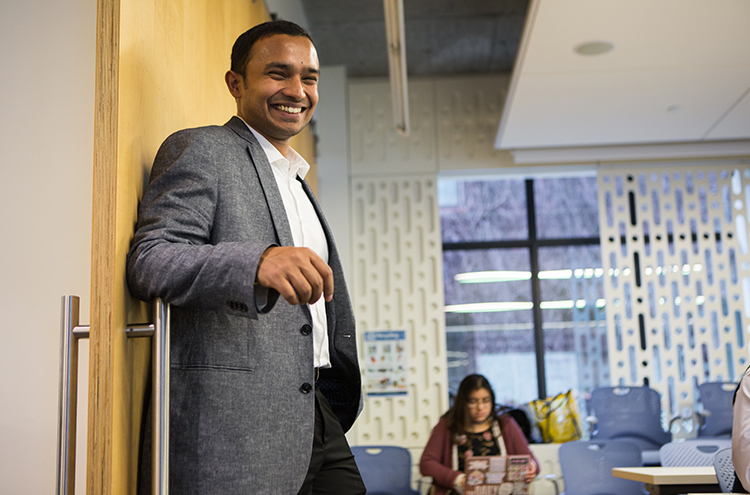 Mukherjee is currently in the thick of his doctoral work, conducting experiments with Rombokas and Aubin on understanding how people perceive their own limbs as compared to artificial ones. He has found that this research underscores the different lenses through which human-machine interfaces can be viewed. According to Mukherjee, understanding our relationship to our limbs in a sensorimotor light might one day allow us to design artificial limbs and assistive devices that are truly indiscernible from our own.

“I joined graduate school as a student wanting to make a difference in the state of research in the area of coupling humans and machines. The appeal of bridging that gap has, if anything, broadened, but through my experiences in graduate school, I have discovered that more than an engineering effort is required to design the best interfaces between man and machine,” Mukherjee said. “Often engineers work in silos to design the best technologies for a specific function, and yet these devices unfortunately end up being used only in the lab, or worse, on the shelf as a technology demonstrator. One of the important lessons that I have learned as a part of the UW neural engineering community is the value of early and frequent participation of the end user in the design process. This approach goes by different names, such as ‘user-centered design’ or ‘concurrent design,’ but at the core lies a cycle of frequent validation of ideas through the lens of the needs and requirements of our end user.”

This user-centered approach to engineering aligns well with Mukherjee’s work in educational outreach. He is looking forward to making an impact in the future, not only through his research, but also by helping to build the neural engineering community, expanding access and quality of education for all.

“Working at the CNT, at NESSP and with Dr. Kat Steele, I learned how important it is to convey nuanced scientific information in a clear and understandable manner to an audience,” Mukherjee said. “My time at Oculus was deeply stimulating and enjoyable enough that I am returning there as an intern this coming summer. All of this is to say that beyond the doctoral work, whether in academia or in industry, I’m excited by opportunities to bring scientific approaches to bear on difficult problems, while furthering excitement and participation in science and education among the young and the less-young!”

Contact Gaurav Mukherjee to learn more about his research and work at the UW, outreach to K–12 students and involvement with the CNT.